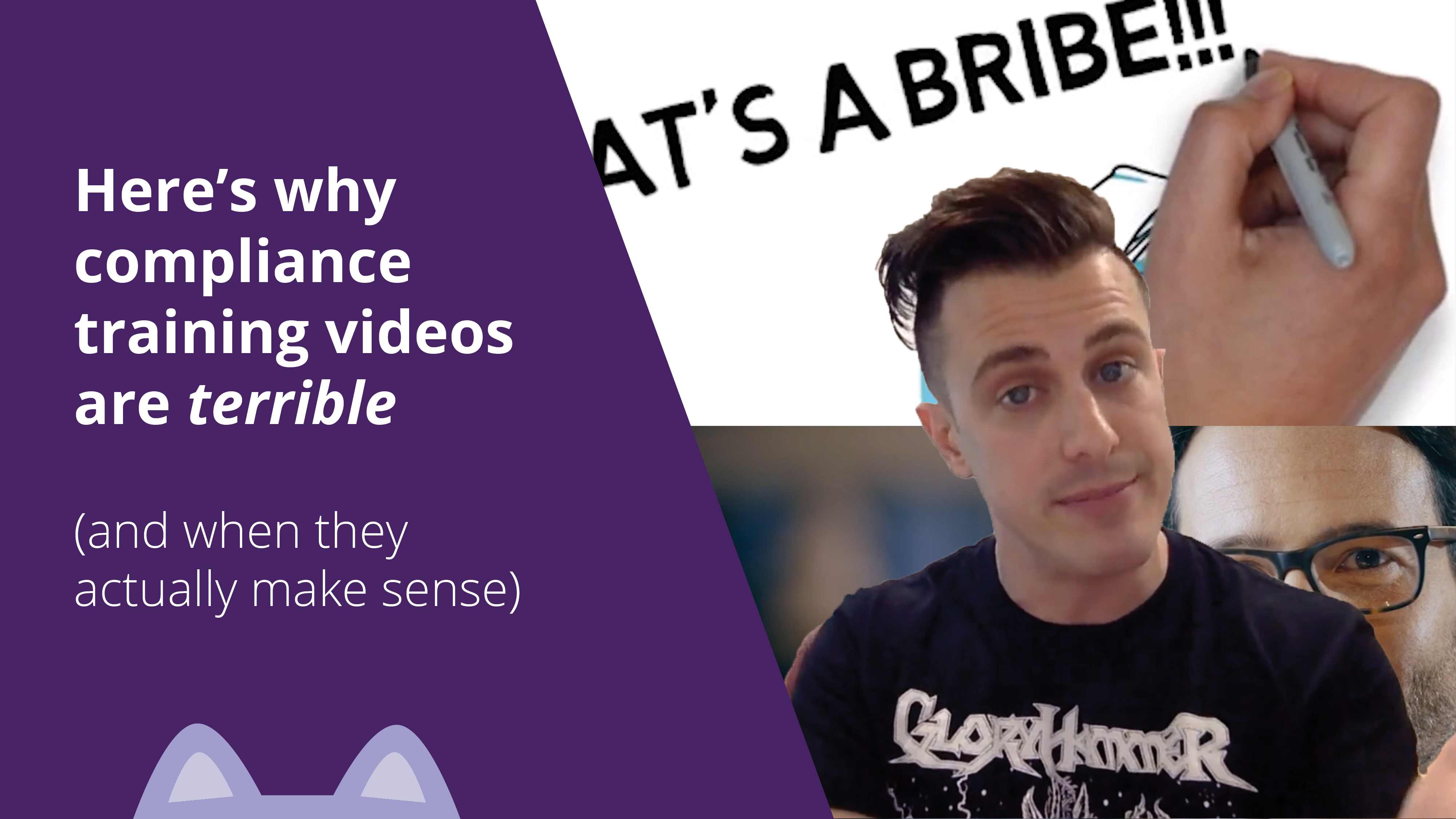 Here's why compliance training videos are terrible (and when they actually make sense).

One of the most common things we talk about around Broadcat HQ is compliance training videos—probably because, like all Real Americans (TM), we hate them.

We also think it's possible to use video well, and we've promised in the past to articulate when you actually should use video for compliance training.

And as we started to use video as a tool for marketing and product walkthroughs, it felt like the right time to break this down.

So today I unpack three cases where you should use video for compliance training, so you can avoid buying a bunch of mediocre junk—and double-down on buying quality stuff where video makes sense.

And guess what? WE DID IT IN A VIDEO, SO META!

(Watching on mobile? The in-video links won't work—watch it on a regular computer for those.)

Amazing. Tell all your friends!

(I mean, your life is clearly better for having seen the fake training clips we do in the first minute; your friends need that in their lives, too.)

And hey, as a thank-you for telling everyone you know and helping us rid the world of mediocre compliance training videos, here’s some bonus content too: production notes!

Want compliance videos that are anything but mediocre? Get 'em a la carte through Compliance Design Club!

On the fake training videos:

I know, these are exaggerated. But this is exactly how regular folks view these things.

For example, when I was constantly pitching what we do as part of our startup accelerator, I used this slide to make fun of traditional content: 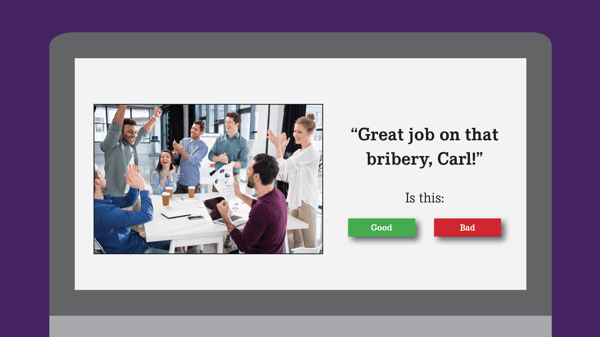 That is very exaggerated, but no one criticized it—and I had many people say that this is exactly what their company's training was like.

So yes, I'm exaggerating for effect, but it won't look like that to non-compliance folks.

Also, note that the operative word in my critique is “lazy.” I don’t mean to say that all whiteboard software videos or b-roll videos are bad—that’s like saying something is bad because it was made in PowerPoint, which is stupid snobbery.

That's because those tools—and others like them, like GoAnimate—make it seem like it's easy to make a video, which attracts lazy, low-effort content when people just arbitrarily decide they want to make (or purchase) a video without thinking through why.

So yes: you can do cool, thoughtful stuff with those tools. You can also do lazy, terrible garbage, because the reduced barrier to entry invites more poorly-considered content. There's a lot more of the latter than the former.

On empathy as a use case:

Yes, I know most harassment videos are terrible—there's even a law review article that shows how harassment training has gotten worse over the years—but it is still one of the best use cases for video.

A big reason why so many of them are awful is the 2-hour training requirement in certain states, which basically incentivizes a race to the bottom in check-the-box content. This results in bad video content in particular since video is an easy way to ensure you’re actually sitting in front of the computer for a set period of time. (More on that here.)

Another good example of using film for emotional impact is helping people understand the personal pain of going through an investigation or lawsuit—not BIG SCARY fines or jail time, both of which are so unlikely to occur as to be meaningless—but the process itself.

This can help you emphasize that sloppy work can result in a tremendous amount of personal pain and disruption, even if it's actually compliant at the end of the day; you know, books and records stuff. The Resonate Pictures guys have done this; you can watch some clips of that on their site here. (It's the antitrust stuff on that page, but this would work for any risk.)

On relationship as a use case:

When you start with this, you don’t need a mic; your computer’s input is fine. I’d actually tell you to not to get any equipment at first, since you might accidentally bump the mic into the wrong setting and clip it all the time.

...like I did in this video, which is why my voice gets a little distorted at times. I’d normally have re-recorded this, but it ended up supporting the point I make around 7:30. But that's not a problem with using a cheap audio input; it's a problem with me being a dummy.

Pro tip, elevate your computer when you film. Otherwise you will look like this: 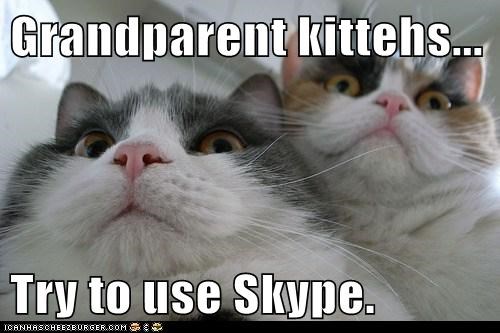 True story: I submitted the “gold toilets” analogy as a conference topic two years ago. It did not get selected. A session on using augmented reality for engagement did. Sometimes I am very lonely.

Before you ask: Gloryhammer is a power metal band. Here is a song they wrote about space goblins.

No, that is not a metaphor for anything, just regular space goblin stuff. I was going to write out all the backstory, but it really speaks for itself. (And if none of this section made sense, watch our video again.)

It's worth emphasizing that all of my commentary here is about training, not education or awareness (see here for our breakdown of what training is and isn't, and check out this post for examples of awareness videos that we offer through Compliance Design Club).

The use cases for video for awareness are much broader than what I've outlined here, I think—that's where you can do some of the more "fun" stuff, like what we did here in our anticorruption video for salespeople—but you gotta be clear on what you're doing.

It is easy to spend way too much time on awareness materials on the mistaken belief that it's training, resulting in a really slick-looking rollout that doesn't actually tell anyone anything.

Know what you're doing and why, use the right tool for the job, and you'll be good. 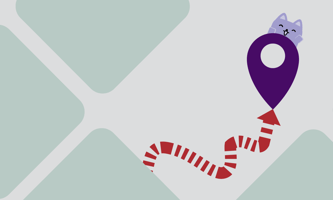 We’re explaining how to show your program works, in dollars. You should attend.

Hey, what’s the business case for your compliance program? 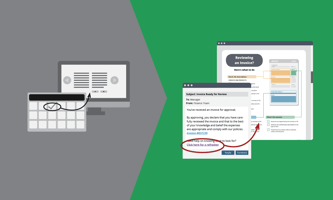 Three things define effective compliance training—and here's what they are.

Most compliance training is awful, and we usually misdiagnose why. 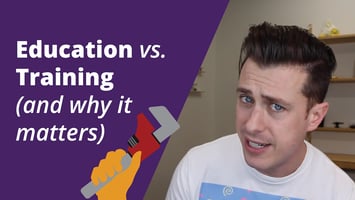 Compliance Education vs Compliance Training—the difference and why it matters

The reason most compliance training does not work is that it's not training at all. It's education....