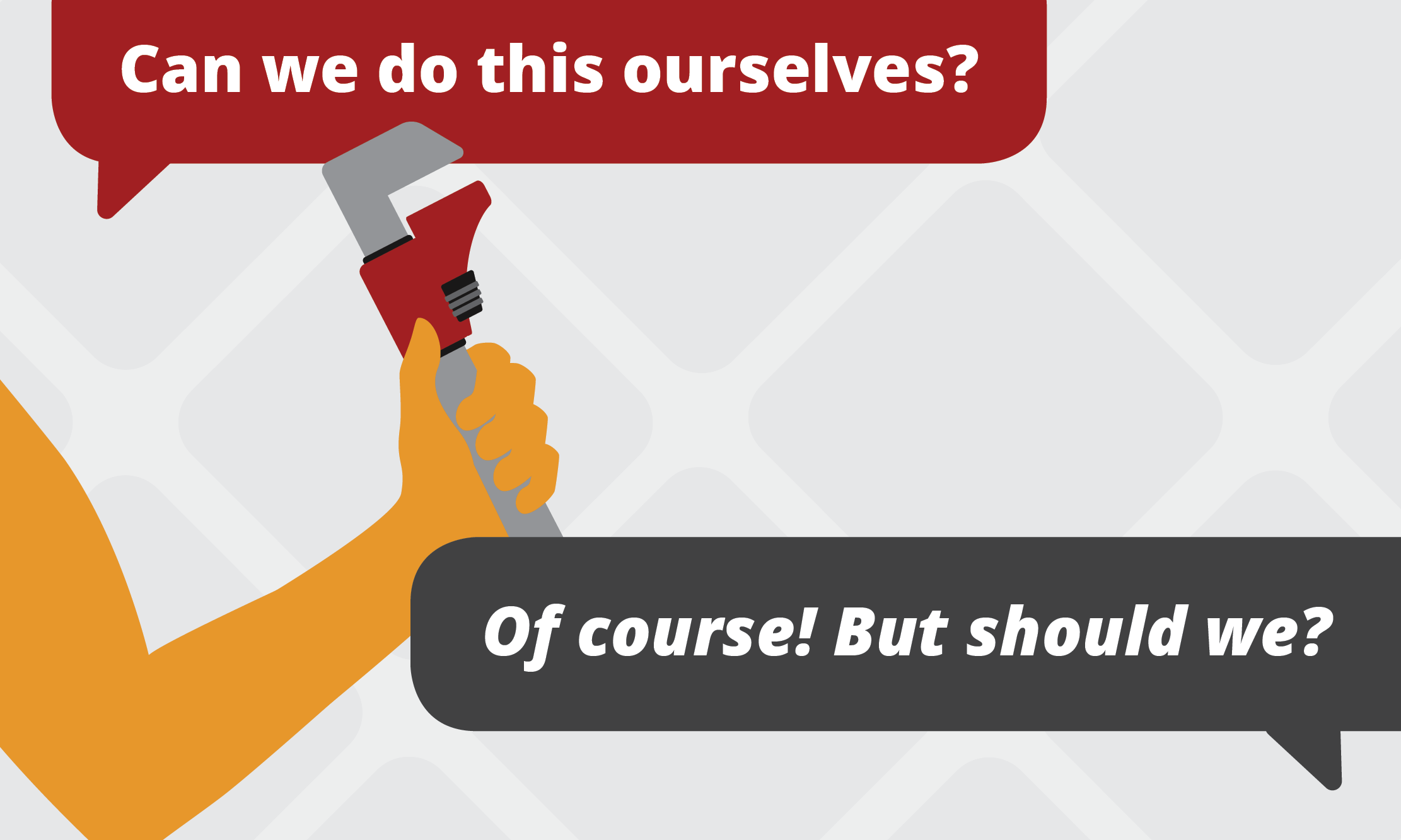 Don't ask “can we do this ourselves"—it's the wrong question. Here's why.

Now that I run a company, it is sometimes embarrassing to look back at my in-house career and realize how clueless I was about how business works.

For example, I am mortified at how proud I was about doing stuff in-house to show that “we could do it ourselves.” I thought that this showed that I was resourceful.

And I was wrong.

Because now I realize it just showed that I didn’t understand how business works.

The goal of business is not to show that you can do everything yourself. That is the goal of being Bear Grylls.

The goal of business is to get the most results with the least effort; that’s how profit works. Sometimes that means doing stuff yourself, but a lot of times it means having someone else do it.

So, the point of this article is to save you some pain by explaining a mental shift that will help you think more like a business owner and less like an employee...which will make your business leaders very happy.

Ready? Here it is:

Instead of asking “can I do this myself,”

ask “should I do this myself.”

Let’s unpack why it matters.

“Can we do this ourselves” is a dumb question.

“Can we do this ourselves” is a dumb question, because the answer is always “yes.”

Think about it: you can do all of compliance yourself. None of this stuff is patented or magic or whatever.

It’s just corporate process stuff; even the tech stuff can be done in-house if you really want. So you can do all of it yourself. Every part.

But that does not mean that you should.

After all, there are plenty of things that you can do, but could also be done by someone else—and most likely, they’ll do it cheaper and better.

That’s how specialization works. People get good at doing a narrow set of things really well, and they can do those things better and cheaper than someone who doesn’t specialize in those things.

For example, pretend that you decided that mortgages were too expensive, so you went to the forest to go chop down a bunch of trees and make your own house. You could do that.

And your house probably wouldn’t be as good as a house that had been made by an architect and a builder and a general contractor—the people who specialize in this stuff and do it every day. You’d likely end up with an inferior product, and if you ended up saving any money at all, it'd just be because of the sheer amount of your own time you put into it.

And that last bit—time—is especially important for corporate stuff, because you get paid for your time. In the corporate world time is not an abstraction; it’s real money.

So the problem with asking “can we do this ourselves” isn’t just that the answer is always “yes.”

It's that asking “can we do this ourselves” usually assumes that doing stuff yourself is better or cheaper. And often that's just plain wrong.

At the same time, your company hired you to do stuff. So clearly, you need to be doing work—but not all work is valuable.

So that leads us to our next point: what should you do?

Focus on what only you can do.

Well, you should do the stuff you’re the best at.

This is a cliché, but it’s true. We talk about this in the startup world, but it’s also one the basic premises of Good to Great, a book read by pretty much every businessperson ever.

Basically, you should focus on doing what only you can do: the stuff you can be the best at. Because if you’re doing other things, you’re just replicating what someone else can do better—and you’re taking time away from where you can truly make a difference.

And for in-house compliance people, you can be the best at understanding your business operations.

And so when you’re looking at your time, it should go towards understanding what your business actually does and how it works, because that’s what only you can do. Practically, that means you need to get out from behind your desk and go sit with the businesspeople and know what they’re doing.

And by excelling at that, you can make what vendors and consultants and lawyers do actually helpful to you, because you can take it and put it in the context of what your businesspeople do.

This is a full-time job. Knowing your business is not just knowing your logo and whether people wear suits and whether you call HR “Human Resources” or “Human Capital.” That's surface-level culture and you can figure that out in like 10 minutes; you don't need an in-house compliance team for that.

Knowing your business means understanding how your business model operates at a granular level—knowing who does what in a risky process. That is the best use of your time, because that's what in-house teams can do better than anyone else.

And to focus on that, you need to be really thoughtful about answering the “should we do this” question.

There are certainly instances where it makes sense to do stuff in-house, but that should be the result of a thoughtful process about what your time is worth and what you're not doing as a result. If you do that analysis and it makes sense, go for it.

But as much as possible, do what only you can do—because you're the only one who can do it—and let others do the rest.

Bonus section: “But I don’t have any budget!”

Let me tackle an objection to this. Because sure, it’s totally possible that you do stuff in-house because you don’t have any budget.

But real talk: if you keep trying to do everything yourself, YOU'LL NEVER HAVE ANY BUDGET.

Why? Because if you keep trying to “do more with less,” you will keep getting less. It’s a counterproductive approach that puts your program on a treadmill of doom.

That's because the right mindset is not “do more with less.”

The right mindset is “get more.”

Here’s an example: let's assume two compliance teams each get a budget of $100. Which team is smarter:

Team 1 takes the “do more with less” approach and tries to run an entire program on $100. They spread themselves thin trying to do everything in-house—but because they only have $100, they can't go deep into any single area.

Team 2 takes the “get more” approach and spends the $100 on a single project. They use the money to explore every angle, fully solve the problem, and build a presentation that shows how the $100 they spent saved the company $1,000—and how they could do even more if they were given more money.

Team 2 is smarter. They will get more money because they were focused and solved a problem and could show why it mattered. Their program will grow and their company will benefit.

Team 1, on the other hand, tried to do everything with no resources—and since that's impossible, they ended up doing just a little of everything. They will get less budget next year because they tried to attack a million problems and actually fixed none of them, and there is no business case for "not fixing things."

Here's the point: if you are doing a lot of stuff in-house because you don’t have a budget, STOP DOING SO MUCH STUFF.

Compliance (like business) is not a DIY project, so don’t buy into the mindset that you have to keep doing more things with less money. Instead, focus your efforts on doing a few things really well, show that they work, and use those results to get more budget—so you can do even more things really well.

Double bonus section: "But we can do it better in-house!"

I get this, because I thought this.

I liked making my own training because I thought I could do a better job than the vendors.

And if you think this too, here is my challenge to you: prove it.

Quit your job and launch a company. You can start off as a one-person consultancy with no funding; that’s how Broadcat got started. It was me and my wife’s Mac and a trial copy of Adobe InDesign.

If you're right, you will get to do even more of what you like, have more fun, and help more people. And you’ll free up a headcount at your company for someone who actually does want to focus on what your specific business does.

(And if you do not want to start your own company, but you think you can do a better job than vendors at training or design or advisory in particular, email me and we’ll talk. I’m doing headcount planning for next year. You will have to move to Dallas.)

You don’t need annual compliance training, but we made some anyway. Here’s why.

Want to measure corporate compliance? Look for the dirty socks.