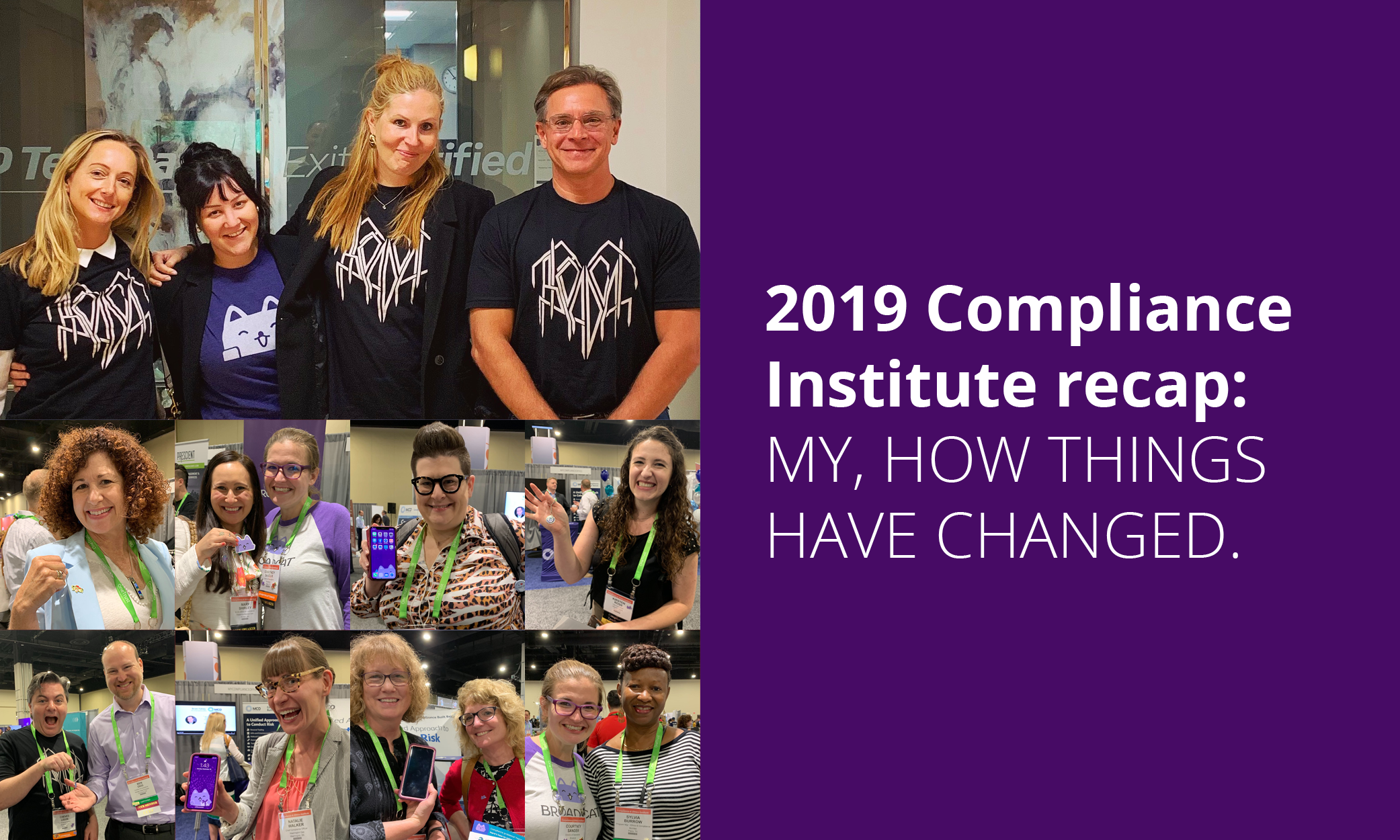 2019 Compliance Institute Recap: My, How Things Have Changed

You guys: we just got back from the SCCE’s annual conference—you know, Compliance Mardi Gras—and MY, HOW THINGS HAVE CHANGED over the past few years.

Here’s how a lot of phone conversations went in the early days:

Person: Yes, I saw some of your work, the materials are so simple and great!

Broadcat: Thank you so much! How can we help you?

Person: Do you have this stuff in video-enabled augmented reality interactive e-learning instead?

Broadcat: Hm. Could you unpack that a little?

Person: Sure, I love how simple and easy to use your work is, but I think it would be even better if it was complicated and virtually impossible to use.

Basically, when we first started four years ago, everyone was so used to compliance training getting more complicated and expensive every year that the response to our approach was somewhere between “this is so refreshing” and “what kind of sorcery—nevermind BURN THE WITCH.”

And over the past four years, we’ve been methodically encouraging folks to:

In short, to take a design approach: work backwards from the actual behavior you want to drive, pick the right tools, and do what you think will actually work.

And that—plus having a brand that is full of bright colors and a little purple cat—worked!

CHECK OUT OUR SQUAD, Y’ALL

At this year’s event, we got to reconnect with tons of clients, customers, and friends, as well as meet lots of new folks who are drawn in by the tractor beam that is the Broadcat mascot. 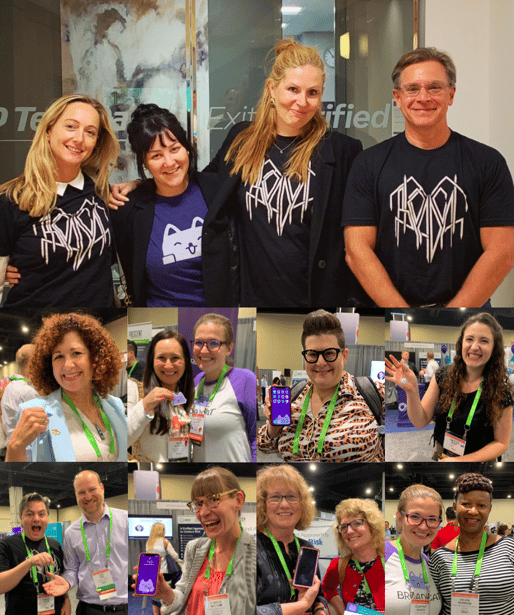 And yes, that’s right: if you’d attended—or if you are Bruce from T-Mobile, because I gave Monica one of these for you—you would have seen that our 2019 shirts, as modeled by Team TechData at the top, was “Broadcat” re-envisioned as a thrash metal band’s logo.

(And also, yes, TechData obviously has a very cool compliance team—after they swung by the booth, our head of marketing said “if I didn’t work here, I would want to work with them.”)

And if you’d attended, you’d also have seen us hand out these guys: 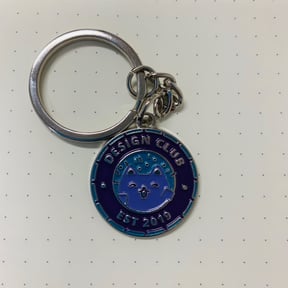 ... to celebrate the launch of Compliance Design Club on October 1st, which is like Amazon Prime for compliance content—a la carte e-commerce with member benefits. You can even try it for free! Just go here. 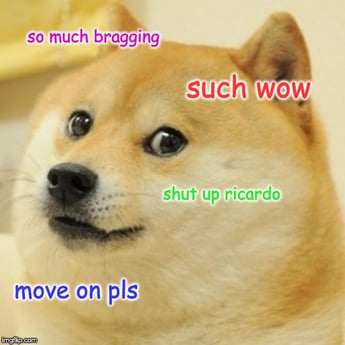 Fine, fine: enough bragging. Let's get specific about the themes we're seeing that show us how much things have changed.

#1: Everyone is tired of stupid media trends.

Compliance conferences used to heavily feature vendors working with in-house teams to promote the latest way to light your company’s money on fire (sample session title: “How we hosted the world’s first compliance-themed 50 Shades of Grey Fan Fiction Contest and you can, too!”).

And yeah, everyone seems burned out on that. We still have some work to do here—I have a small-but-manageable stroke every time someone says “microlearning”—but we appear to finally have moved past the childish assumption that the problem with compliance training is that it doesn’t have enough pieces of flair. Hooray, WE DID IT!

#2: The best-practice fetish is donezo.

Part of the reason why we had all these dumb media trends was because we all used to think compliance was an endless progression of spending more money and energy to meet ill-defined “best practices” to show that we were trying, because “that’s what prosecutors want.”

Now, the government people will probably tell you that this was never what they wanted, but they also need to own that they could have stopped this nonsense a lot earlier. Instead, they wrote clumsy settlement agreements that could be easily (and to be fair, often willfully) misread—*cough*Morgan Stanley*cough*—and decided to communicate in vague platitudes that gave no clarity or direction.

I trace the start of this back to Compliance Week 2017. One of the government's recently-departed prosecutors was on stage talking about the Evaluation of Corporate Compliance Programs and saying “we expect you to have appropriate resources, so if you are a bigger company, you should have more resources," pretty standard best-practices stuff.

Then some hero gave Hui Chen—who was just sitting in the crowd—the microphone and she said “so … I wrote that document, and more is not better, smarter is better,” and everyone was like:

Or like, at least me and Forrest from Abercrombie & Fitch, who had two separate copies of that document with him, were like that.

Because as we previously reported, like half the people at that conference said they hadn't even read the Evaluation of Corporate Compliance Programs so they were probably just playing Candy Crush or whatever.

But now, a few years later, that epic murder-by-words has finally trickled down. And the weird “we have to be best practice” conversation has been pushed out by “actually, maybe we should just see if this works for us.” DOUBLE HOORAY!

Finally, there’s been a huge sea change in how we talk about the business-side folks in this space.

A few years ago, the conversation at these events was dominated by “values” talk, which sounds good—who can be against values?—but in reality meant we were just lecturing the business on how they need to be good people instead of actually helping them figure out what that meant in practice.

And it’s figuring out the “what that means in practice” part that gives values credibility and traction. Anyone can say “integrity is important;” that’s easy and meaningless. Figuring out how to apply “integrity” to finance process and sales pitches and marketing copy so it actually means something, on the other hand, is hard.

That’s radically changed. Now instead of talking at the business with a bunch of high-level corporate values talk—you know, the same thing Enron did—we see a deep concern with talking with the business, getting into the weeds of what they actually do so compliance can be part of how their work is done. TRIPLE HOORAY!! 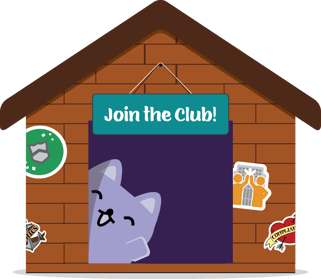 Want to get the tools you need to work with your business? You can get tons of jobs aids and other compliance tools a la carte through Compliance Design Club.

Looking back on the past four years, I’m incredibly optimistic about the future. Like this optimistic:

Yes, I know you were expecting Timbuk 3 (google it); you got Corey Hart.

And in the past, we’ve had to repeatedly battle against folks who took a deadly seriously tone to a topic they didn’t seem to really care about at all.

And in the early days? It was hard.

But there are more of us each day, and WE. ARE. WINNING.

And please know that we are deeply grateful to each of you, whether you work with us or not, for that fact.

Compliance Design Club is here AND IT IS EVERYTHING.